Philip Madoc talks with Fiona Moore about the inherent villainy of spectacles, turning up for the wrong part, giving a Commanding performance in Kaldor City: Storm Mine, and how to get a head on Karn. 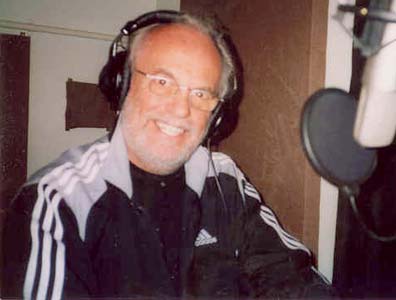 Your first association with Doctor Who came about when you played a character called Brockley in the 1966 Doctor Who film Daleks - Invasion Earth 2150AD.

Yes, that was with Peter Cushing. He was playing Doctor Who, and we got on very well together-- a very nice man, who was great fun to work with, although, as I remember, he was rather ill at the time. It's strange, but although I appeared with the Daleks, people rarely ever ask me about that role. I thought it was a good part to play, and my character had a memorable send-off, locking himself in that hut, with the Daleks then surrounding it and blowing it up with their guns. They killed me because they had no souls, which means that you should never ally yourself with the Daleks. I also remember these actors, who were playing slave workers, came up to me and said, "How is it you're dressed so smartly, and we have to wear these rags?" and I replied, "Became my character's a black-marketeer."

Do you think your appearance in the Doctor Who film had anything to do with you being cast as a villain in "The Krotons"?

No, I don't think so, as that part came about through the director, David Maloney, who I'd previously worked with on Last of the Mohicans, which had been a great experience for me. I mean, how often do you get to play cowboys and Indians properly? It was based on a splendid novel, and it was done very well, and from that I did several very good parts for David on television and, of course, some of the parts I did for him were for Doctor Who.

What did you make of Eelek, the character you played?

Well, David Maloney thought Eelek was the funniest name he had ever heard! He kept calling me Eelek, and not just when we were doing it, but for quite a long time afterwards. And David has this grin, that spreads right across his face, especially when he went, "Eelek!"

How did you get on with Patrick Troughton, Wendy Padbury and Frazer Hines?

If you have memories of a production that took place, it's usually because the company was pleasant; in fact, I still meet up with Frazer from time to time, even now. So it's either the people, or perhaps a storyline that was particularly unusual. At the time, though, you don't think that in twenty, or thirty years, a particular part you played is still going to be talked about. It's a bit like the Dad's Army episode I did all those years ago. There were eighty-one episodes of that series, and I did one, and it's that one which becomes a classic of British television comedy, but at the time, there was no way you were going to know that was going to happen. And now, no matter where you are, somebody is going to mention it. Little kids come up to me and tell me my lines! It's incredible.

So you don't remember much about the storyline of "The Krotons", then?

No, but I do remember "The War Games", and I though that was a marvellously inventive idea, going back in time and kidnapping soldiers from Earth, and then setting them to fight famous battles. And I played the Lord of the Universe, or something.

You played the War Lord.

War Lord, was it? Well, someone told me that he was the Lord of the Universe, and I remember thinking, "Well, I can't get much further than this!" And I wasn't killed at the end, I remember that. I was disintegrated, with my atoms distributed to various parts of the Universe, with the idea being that I could have been brought back together sometime for a rematch. It was thought of very seriously, but then it took the form of another character coming in, and I wasn't around for that one. I remember at the time I was told by a director, who had been up in the box to see the recording, that he thought the War Lord one of the scariest characters he'd ever seen. I don't know if it was my performance that frightened him the most, or those pebble-lensed spectacles that I was wearing for the part.

You played a villain again in "The Brain of Morbius", this time a mad scientist called Mehendri Solon. What did you think of that story?

I thought it was outstanding. I've always thought that, it was very well done. A lovely character to play and well directed. And it still stands out for me really as a candidate for a classic. A very important features within the whole of Doctor Whodom. 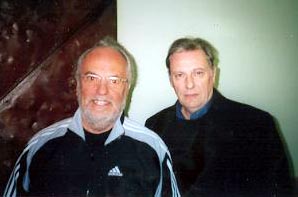 I read somewhere that you still remember some of your lines from the story?

Yes, there were some very memorable lines. I remember that at the beginning I'm making this body, and I've got it all except the head. I'm wondering where I'm going to get that from, and then, there's a knock at the door and it opens, and there they are, the Doctor and Sarah, in the middle of a rainstorm, asking for a glass of water. So, I invite them in, and as the Doctor comes into the light, he says, "What are you looking at?" and I say, "Your head! Oh, what a magnificent head!" I just thought that was such a very good line, you know, it was very sinister, but witty as well. So, there was a lot of that, good moments. The character interplay was great, and I remember there were some very, very, good looking women. I mean it does help enormously, even if they are witches!

Did you know that Mary Whitehouse got quite upset by the story?

Yes, she did. I think it was the part where I picked the brain up off the floor. I didn't see anything wrong with picking the brain up. It worked within the context of Doctor Who et cetera, so I don't really see why she got upset, but it was Tom Baker who told me that Mary was having one of her moments. She was very powerful, in here day, and sometimes she hit the mark, but I didn't agree with her in this case.

A few years later you were working with Tom Baker again, this time playing the part of Fenner in "The Power of Kroll".

I haven't seen that one for a long time. The location filming was done on a river near the East Coast, and when I got down there, I found that I'd been sent the wrong part! I had been told that I would be playing the villain [Thawn], but that role had actually been given to actor Neil McCarthy.

What did you do?

Just got on with it, and played the other character instead (laughs). It was disappointing, but you have to take these things in your stride.

I really thought you made the character that you did play, work very well. He was sinister, but his conscience comes through.

It's very nice of you to say that. I'll have to try and get to see it myself now, to find out what I did! I remember John Leeson was in it, and, of course, I've just finished working with him on Kaldor City: Storm Mine, which was great fun. I remember Glyn Owen, as he was someone I knew very well at the time, a very clever actor, but I also particularly remember Mary Tamm, because aside from the fact that she's Estonian, she's also a very good-looking woman.

So, altogether, you did four Doctor Who stories for television, and you survived in two, that's quite a good record, don't you think?

Yes, there's hope for me, isn't there?

Recently, you did a Doctor Who audio for Big Finish called "Master".

Yes, yes, and I enjoyed doing it, but I'd like to have seen a story where I played the Doctor, or the Master. As to how I would put it over, I have no idea, but if it was written for me, then, like they did with Tom Baker, a good writer would pick up on the individual points in my character and bring them out.

Did you know that the part of the Commander in Kaldor City: Storm Mine was written for you?

I was told that, yes, and it's nice to know. The Commander is interesting, and the lines he has to speak have a lot of style to them, it's a very good part to play, but I'm also wondering what it was they saw in me, that made them choose me for it. I'm intrigued, as it's quite unlike many of the roles I am usually offered. Maybe, when I hear the finished production, I'll discover the answer.

This interview has previously appeared in Celestial Toyroom Issue 323.