Actor Scott Fredericks tells Alan Stevens how after fighting the Daleks and summoning the Fendahl, his work for Servalan led to Kaldor City. 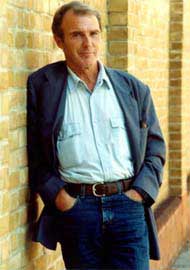 Scott Fredericks, returning to the worlds of Doctor Who and Blake's 7 in the independently produced Kaldor City audio series, had two reasons for taking up an acting career. "The first was to get away from running the family business," he says. "The second was to get away from being me! As soon as I walked onto the stage at school I liked it a lot. I liked being other people, because as a kid I was quite shy. A lot of actors are very shy basically, I think that's partly it.

"So I left Ireland and came to England. I went to a couple of preparatory drama schools and then I got a scholarship to RADA [The Royal Academy of Dramatic Arts] - but I also got the chance of a job, and so I took it. It did mean that I missed out on a lot of RADA contacts, but then I did a Doctor Who and so it didn't really matter any more. Doctor Who at the time was considered to be light entertainment. What I mean is that if you were doing a play it was much more snobbishly acceptable then doing Doctor Who. However, I remember Peter Barkworth [Leader Clent in "The Ice Warriors"] saying, 'My life with the BBC didn't start until I did Doctor Who.' And the same happened to me. Doing Doctor Who led to an enormous amount of work, and it also didn't disqualify me from doing another story a few years later.

"My first Doctor Who story was "Day of the Daleks", in which I played a character called Boaz and had a lot of scenes with Anna Barry and Jimmy Winston. We were a kind of trio of freedom fighters against the Daleks. There was no great subtlety to the script, but it was amazing fun. Very much a cowboys and Indians kind of story. The Ogron monsters were wonderful. They were like giant apes and were played by these huge guys. Aubrey Woods played the Controller, which was by far the best role. I had worked with him before, and he's absolutely marvellous. A very Dickensian actor and he was dead right for the part.

"I also had a few scenes with Jon Pertwee. We got on fine, but there were a few 'tricks' he used to play that I wasn't too happy about. One of them was to tell gags just before a take, to make you laugh. There was also this joke fight I did with him, which he choreographed. He'd convinced the director that he knew all about fighting as he'd been some sort of commando, but it ended up looking quite comical. My kids, though, loved it. All the things I've ever done, and that's their favourite!

"My character eventually gets killed blowing up a Dalek. It was a location shoot, and as I lay there on the ground, daubed in ketchup, I suddenly realised that everyone else had cleared off. I just managed to stop the wardrobe van in time to get a lift!

"Doctor Who was great fun, but it was also a real eye opener too, because there was a great deal of pressure. We had to do a lot in a very short time. Having said that, the pressure was nothing when you compare it to another show I did called Crossroads. There was no pressure like that! I played this speedway ace that falls in love and has an affair with a French receptionist, who worked at the Crossroads Motel. Talk about pressure! I remember one scene where I had this crash in filthy speedway leathers on the studio floor. Then they stopped the tape and I had to get into a shirt, tie and jacket so as to sit down and have dinner with this French lady. We had forty minutes to record twenty-five minutes of material and four scripts to do a week, which was quite a lot. It was all you could do to remember your lines, forget about the performance. If you could remember your lines you were doing really well.

"I did Crossroads for three months, after which the producer called me into his office and asked if I should like to stay on. I said, 'I don't know. What do you think?' and he said, 'My advice to you is that if you want to be an actor, get out of here quick. If you want a steady income, stay.' So I got out quick and did another Doctor Who. 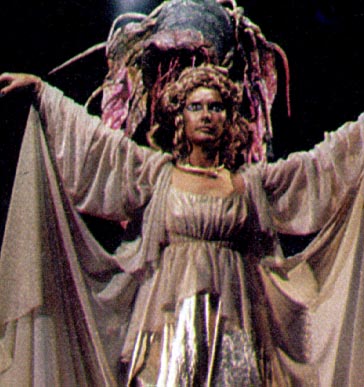 "'Image of the Fendahl' came about through director George Spenton-Foster. He was slightly mad and he would go bananas on some things, but we got on very well and he always chose splendid parts for me. I think George had me in mind to play Stael because of a performance I had given as a murderous Scientologist in a series called Barlow. I'd had this 25-minute scene with Stratford Johns in which I talked about chopping people up and putting them in black plastic bin bags. And said things like 'Each man has his time. Christ had his time, now it's mine.' Maximillian Stael was a little similar, in that he had this plan to take over everything. I recall one scene were Stael had to shove a gun into someone's face and say, 'I'm going to enjoy your terror.' I was really getting into it, until George said, 'Tone it down. We don't want any more complaints!'

"Working with Tom Baker was an education. The way he delivers lines, it's so beautiful. The rhythm of his speech is wonderful. And he subtly adjusted a few speeches so that they just tripped off the tongue. Tom was great fun as well, and a very generous actor.

"Talking of lines, there was one I had which completely creased the cast. It's in the scene where Edward Arthur's character [Colby] tells us about a dead body. 'He didn't die easily,' now cut to this wonderful line, and me, 'It is never easy to die.' Everyone just fell about and George threw a wobbly, 'Now grow up! You're not in short trousers.'

"The Fendahl was hilarious. There was a little guy inside it. And there was this slime on the floor. It would leave behind this snail trail as it moved along. We loved it. And Wanda Ventham went gold, with these big painted-on eyes. That took hours. We were waiting around for ages while that was being done. She was great too. We had such a wonderful time doing that, and I thought Louise Jameson looked very dishy in that skimpy leather costume!

"A year later, I was back working with George on another Chris Boucher script: the Blake's 7 episode 'Weapon'. Of all the characters I have played this story contains my favourite. Carnell, the psychostrategist. He was exceptionally well conceived and all his scenes were wonderfully written. I was given no instruction on how Carnell should be played, so I suggested to George that being everyone else in the show was so gung-ho, and were rushing around the place being intense, it would be nice to play Carnell in a Noel Coward fashion. Lightly, with a bit of humour, in a knowing sort of way. Bordering on the camp, but not quite camp, but then the costume was camp enough, so I didn't have to do anything.

"All but one of my scenes were with Jacqueline Pearce [Servalan], a lovely person. I wore this long black cape and these fabulous boots, and she was dressed like a white Christmas tree. The two of us looked quite extraordinary together. I wanted to keep my costume after, but they wouldn't let me have it. I offered to buy it too. It was very expensive, but they wouldn't even entertain the idea. I think there was a scandal at the time. Someone in the BBC had stolen a lot of stuff, like bits of scenery and costumes, and was selling it. Eventually the costume department sent me a piece of braid on some cardboard. I still have it somewhere.

"There were rumours at the time the Carnell would return, but sadly nothing came of it. Perhaps they thought that to bring him back would have over-burdened the series, and there wouldn't have been enough for the lead actors to do. It's a very worrying thing for actors if they have been in a series for years and then they see someone else coming up, as it means less for them. I suppose I could have done the occasional episode. That would have been nice and it would have solved the problem, but they didn't do it. That doesn't mean though that the fans forgot the character. I recently found a picture of Carnell on the Internet, and a biography all about him. My name wasn't mentioned once! It's strange how a character can take on an independent life, but then, Carnell was very different and because of that he stood out.

"A few years after doing Blake's 7 I was invited to a convention in Chicago. I was appearing in a play in Dublin when I received a call from the organisers. At the time I couldn't understand what was going on as I'd only done one episode, but they told me that there were a lot of people over there that liked Carnell and had written stories about him for their fanzines. I though that this was really extraordinary, So the following year I went to their convention and I was completely gobsmacked by what went on over there. To find people who knew more about me that I knew about myself! They were fanatical about it. And they also knew of all the things I'd done in Doctor Who. I think at the time British TV was the best in the world, and they obviously had taken notice.

"Carnell's appearance in [Chris Boucher's BBC Books Doctor Who novel] Corpse Marker has now led to me playing him again in a new CD series called Kaldor City. I was a bit nervous when first approached, and so I had a quick look at the video, just to be on the safe side. Of course the great thing about doing it for audio all these years later is that I don't have to look the same! The series has got a smashing cast, with names like Paul Darrow and Russell Hunter, and these new scripts are very nice to Carnell. They give him lots to be Carnell about. All very easy and very enjoyable to play. I'm so glad I was asked back. If someone else had taken the part I would have hated it. I wouldn't like to relinquish that character. It's really been a pleasure."

This is an extended version of an interview that previously appeared in issue #307 of Doctor Who Magazine.