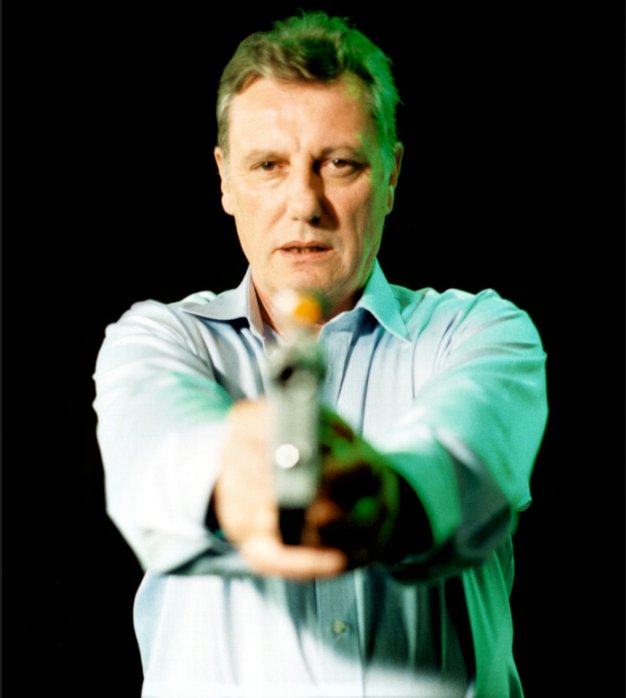 While guesting on Pointless, Paul Darrow’s last TV appearance, he and Michael Keating were asked why they thought the popularity of Blake’s 7 had endured. Michael indicated Paul and said, “This man.”

It was a typically generous and affectionate statement from Michael, but it was also a true one. Once Blake had left the show and Gareth Thomas the world, it fell to Paul to lead the rebellion and the fans.

And how memorably he did it! Though this could, and did, cause a few headaches.

It wasn’t that he was difficult when filming — although he broke most props he was given, he was always, according to accounts from his directors and co-stars, a consummate professional, if somewhat inclined towards practical jokes. (One of these involved helping to rig a portable toilet to explode when Gareth Thomas entered it, but the trap was sprung too early, to the discomfort of an unlucky member of the production team.)

He was, however, a convention organiser’s nightmare. People queuing for his autograph would have to wait ages for their turn because he insisted on making each individual signing as personal as possible. Schedules flew out of the window.

Paul’s autobiography, You’re Him, Aren’t You?, chronicles many of his acting experiences and in it, he discusses his talent with disarming modesty. (In another context, he told Gareth Thomas: “You’re the actor; I’m the pretty one.”)

Handsome, he certainly was, but he was a much better performer than he seems to have recognised, inhabiting his role as Avon with great technique, and not a little truth, to create a multi-layered character. Many would argue he gave the definitive portrayal of an anti-hero, and, as he himself said, Blake’s 7 was one of the first, if not the first, TV show to feature an ‘absolute bastard’ as leading man.

Whether charming us as Captain Vimes in Guards! Guards!, inviting us to boo and hiss the despicable, yet ultimately tragic, Mr Carker, in Dombey and Son, or wringing our hearts as the courageous Thomas Doughty in Drake’s Venture, Paul always gave full value in his many roles. Although it’s his flamboyant acting that stands out, he was also capable of subtlety, as evidenced by his restrained, moving performance in the Blake’s 7 episode, “Rumours of Death”. And he demonstrated both impeccable comic timing and a wonderfully anarchic energy in his appearances in Haggard, The Strangerers, Little Britainand Toast of London.

Paul made two appearances in Doctor Who, as Captain Hawkins in “Doctor Who and the Silurians” and Tekker in “Timelash”, He also voiced Guidance in the Big Finish Doctor Who audio story “The Next Life”. “Timelash” is a good example of his rather naughty approach when faced with a story and character he found absurd: it’s affectionately known as ‘Darrowing’ by his fans, and ‘Theatrical Ham’ by his critics, but whatever it’s called, everyone seems to agree it’s wildly enjoyable... for the audience at least!

As an only child, Paul Valentine Birkby (his given name; he changed it on the advice of his agent) spent so much time at his local cinema in Chessington, Surrey, that his mum had to ring them up to send him home for his tea. It was this constant exposure to celluloid magic that gave him a taste for show business.

He was educated at Haberdashers’ Aske’s, (a public school), as a scholarship student, an experience he didn’t completely embrace. Then, with the support of his father, he enrolled at RADA, where he studied with such luminaries as John Hurt and Ian MacShane, eventually sharing digs with them. After his graduation, he honed his skills in repertory theatre, spending four seasons at the Bristol Old Vic, and travelling all over the country and abroad with other theatre companies. He was also busy on television, taking on various roles, including a regular part in Emergency Ward Ten playing Doctor Verity, an Ear, Nose and Throat Consultant — who, at the age of 24, also performed heart surgery and spoke fluent Mandarin! His long-standing girlfriend, the actress Janet Lees Price, had a role in the show as well, and it was during this period that they married. (“Dr Verity marries Nurse Jones” was the headline.) The relationship flourished for 48 years until Janet’s untimely death from cancer in 2012.

It was 1977 when Paul auditioned for the role of Kerr Avon. It would make him a household name. He has since reprised the role for two BBC audio adventures, “The Sevenfold Crown” and “The Syndeton Experiment”, and in many Big Finish audios. Always interested in reviving the series, he first revisited Avon in the post Gauda Prime audio play, “The Logic of Empire”, and later Magic Bullet’s compact disc series Kaldor City (which combines scenarios and characters from the Doctor Who adventures, "The Robots of Death" and "Image of the Fendahl”, with Carnell and Avon — thinly disguised as one Kaston Iago — from Blake’s 7, as well as numbering Chris Boucher amongst its writers).

With his other hand, he completed five novels, (four of them focusing on Avon), his aforementioned autobiography, short stories and an audio script for Big Finish, while making audio versions of his autobiography and his “Lucifer” trilogy.

In 2007, Paul became the voice of radio stations JackFM and Union JACK in the UK. Add in his previous starring roles in Dombey and Son and Drake’s Venture for TV, theatre performances as Macbeth, Elvis, Luther, Cassius and Vimes, current projects voicing characters for online games such as Contradiction, and an abortive attempt to secure a continuation of Blake’s 7, and you will appreciate that, despite the tragedies of losing first his wife and then his mobility (a result of an aortic embolism), he was a pretty busy actor and producer from the start of his career right up until his death.

At the end of Blake's 7, Avon faces the camera, raises his gun and unforgettably smiles as he defies his fate. It seemed impossible that Avon had died, despite the overwhelming odds, and of course he hasn’t and won’t. Avon’s legacy will continue in books, DVDs, CDs and fan fiction. The actor will remain the voice of JackFM in perpetuity.

But the man who went out of his way to appreciate his fans and, in so doing, became a friend, has, indeed, left us, and the loss is palpable.

Immediately after the announcement of Paul’s death, in a tribute to him, Alan Stevens and Fiona Moore of Magic Bullet Productions offered a free download of “The Logic of Empire”, for a limited period of 50 hours. Within 13 hours, the demand was so great, kaldorcity.com crashed twice, and by close, there had been 15 thousand downloads.

A fitting measure of how much the man was loved and how much he will be missed.

* Taken from Paul’s autobiography: his prediction as to how The Sun newspaper would report his death.