Conducted by Alan Stevens and Alistair Lock in 1991, the following interview previously appeared in Skaro Issue 4. 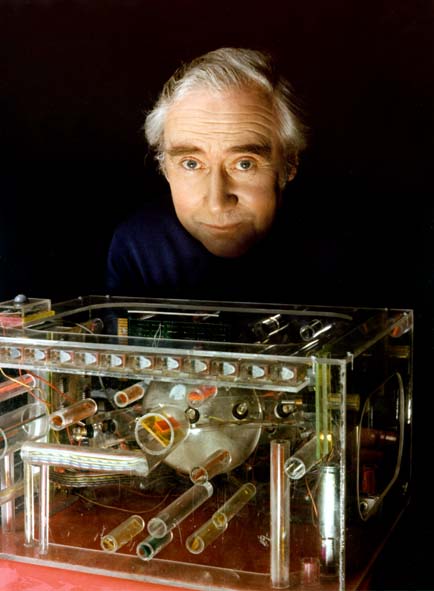 I was always interested in the theatre as a boy, and I used to go round watching the local shows at our little theatre in Suffolk where I lived. I went to lots of summer shows and took down the comedians' gags and when I was asked to do a turn, which quite often happened, I'd get up and remember all these gags that I'd written down and do them for my friends and relations. When I got a bit older, I got an act together and did amateur work for various functions that asked for after-dinner speakers. This was still when I was very young. My very first professional appearance was at Dover Court, where I was compere in a summer show. I did impressions of film stars of the day, like Robertson Hare, Gordon Barker and Charles Laughton in Mutiny on the Bounty.

I didn't go to drama school, but a friend wrote to a repertory company, and its director came down and gave me an audition for his troupe in Hastings in 1938.

When the war came, I was drafted into the army. Soon after, I was taken from my unit, which was the Royal Army Service Corps, and put into entertainment. I ended up with Charley Chester and Terry Thomas in Stars in Battledress. I was lucky enough to be chosen to go abroad, not in the capacity as a serving soldier, but in an army concert party.

In 1944, while acting as compere in a show in Brussels put on by the Belgium Red Cross, someone noticed Ivor Novello and party were in the audience. He was asked if he would play the piano and I was asked to introduce him onto the stage. After the show, he thanked me and invited me to join him and his party for dinner. I told him I'd be leaving the army in February of 1946 and he advised me to contact his production man, Tom Arnold, who was due to start rehearsals for The Dancing Years. So over that meal my future was really settled. Since then I've done musicals, reviews and straight farce. I was in a farce many years ago with Charles Hawtree from the Carry-On films. This was in the Sixties. Theatre is definitely my first love.

My association with Blake's 7 came about when director Vere Lorrimer rang up and asked me whether I would like to play a computer voice in a new science-fiction series he was doing. I knew Vere as he'd directed me during my post-war theatre days. I asked what sort of voice they wanted and he said that they didn't really know, but could I come along to Television Centre? There I met producer David Maloney, who said he didn't want a Dalek voice, but something with more personality. So I thought awhile and did various voices, then a fortnight later they contacted me and said that they liked the recordings very much. I was asked to play Zen the Computer in Blake's 7. I had no idea before visiting the studio that Zen would be such a tremendous size. It dominated the whole set.

I was asked whether I would like to pre-record my lines or do them live. I went for doing them live because I wanted to be part of the action. It was lovely meeting the other actors and taking your cues directly from them. I was actually on the set you sec, in a small cubicle with a table with black drapes round like a little tent, with my monitor and microphone. When I spoke, Zen would light up in time with my voice. My voice wasn't modulated in any way, though occasionally I think they'd introduce an echo.

In the last episode of Season One, they introduced another computer called 'Orac'. Actor Derek Farr not only played Ensor its creator, but also supplied the computer's voice. However, for Season Two, Derek didn't want to stay on and I was asked to take over. I listened to all of Derek's tapes as Orac and at first tried to do an impression of him to smooth the transition, but as time wore on, I made Orac more irascible and of course the writers began writing him in that way.

I think there developed quite a rapport between Avon and Orac. I remember in one episode called 'Gambit' Avon used Orac to cheat at the roulette wheel and win at the gambling table in Freedom City. I had some fun with that. There was another episode called 'Ultraworld' where Vila tries to teach Orac jokes. Orac and Vila had some lovely lines. In fact, I've no axe to grind with any of the writers, they all gave the computers some nice things to do.

At the end of series three of course, the Liberator was blown up and Zen bit the dust. I felt sad in a way because he was a good character, but it wasn't as if I went out of it completely as I still had Orac to fall back on.

Before we started series four, script editor Chris Boucher rang me and said that he was writing the first episode, and would I like to do the voice of a flight computer on the new ship called Scorpio. He said that its name was Slave. I asked what sort of voice he wanted and he said that he wanted some kind of cringing character, who always apologised for everything, and got things wrong. Very different from Zen and Orac. So I agreed, went round and did some cringing voices and that's how Slave was born.

I tried to imagine the computers as real people. Zen was a rather pompous solicitor type, who knows everything and won't be budged on his opinions. Very straightforward and doesn't mess about. Orac I imagined as a little fussy five foot four businessman with a little bowler hat and umbrella, which he'd use even on the hottest day, strutting about saying "Don't do that! Don't be so silly. Do it properly!" Slave I imagined as a Uriah Heap character with a slight cockney accent. Cringing and apologising all the time. I think a bit of jealousy went on between the computers. Orac thought Zen was a silly old fool. Couldn't bear Slave. Thought he should get his act together.

Out of the three, I think Orac's my favourite really. I liked them all, but I could do a lot with Orac I could make him amusing, I could make him irascible, more of a personality. I did Orac's voice on a lip mike, Zen was done on an ordinary hand-held microphone, and Slave had a huge mike which I would speak very closely into, so I could get that deep grovelling tone. There's a lovely scene in the final episode 'Blake' when Slave argues with Orac, that was quite a challenge. They could have recorded one voice, but I said that if it worked, I'd like to do it as per the script and answer myself. You get a continuity from that and a reaction from each voice you're speaking, whereas if you have to remember how you said something before and then come back with an answer, it is more awkward.

On that last episode there was a very odd atmosphere. We hadn't known until then that the series was going to end the way it did, with everyone being eliminated. We didn't know quite how to take it really. There wasn't as much reaction to Slave's death as there had been when Zen died. A couple of letters as far as I remember because everyone else was also killed and it all sort of melted in together. Of course, the only member of the crew that survived was Orac, who disappeared before the final shootout. I think Avon probably put him under a bush somewhere! I still have a few mementos of the series like a teleport bracelet and a little model of the Liberator. Vere Lorrimer had mini Oracs made up to give to the cast at the end. Funnily enough I didn't get one of those. I think Mat Irvine had the real Orac.

I still get a lot of fan mail connected with the series even now. From Germany, Holland, but mostly from America. I get them addressed to myself rather than Orac or Zen. When the series was on, I had letters asking how Orac was made and what the components were to make one. I wrote back and told them I had no idea!

The first convention I ever went to was in the Wembley Conference Hall in 1980. I think I've been to nearly all the Blake's 7 conventions and I always try to go whenever I can, because I love to meet the fans. American conventions are very different from the British because the fans are so dedicated. They want to own you completely. At Chicago I was given a bodyguard and told not to go to certain areas because the fans would pounce on me. I had hectic schedules telling me to go to one place, do this, have a five-minute break, go to another place, do autographs, have a panel. It was exhausting, but very rewarding because they're all for you.

Recently I was invited to a Doctor Who convention in Britain because, many years ago, I played a door! Apparently it was in 'The Ark in Space'. I think I got twenty-three pence for that part. I also did the voice of the Mandragora Helix. More recently, Andrew Morgan, who directed a Blake's 7 episode called 'Children of Auron', called me and asked whether I'd like to do the voice of a giant brain in a Doctor Who story called 'Time and the Rani'. One of the things I had to do was to count from five hundred to nought, backwards. I did it in one take, but it was very difficult, and I was sweating like mad when I finished. I think they used about a third of it. If you remember, it went on droning in the background.

I don't really like to talk about future projects until I've actually signed the contract. Every actor's the same, because it's considered bad luck. There are a few things in the pipeline, but at the moment I'll keep them under my hat.