Fiona Moore talks to K9 actor John Leeson about crosswords, wearing a chandelier, and playing the Chief Mover on a Storm Mine. 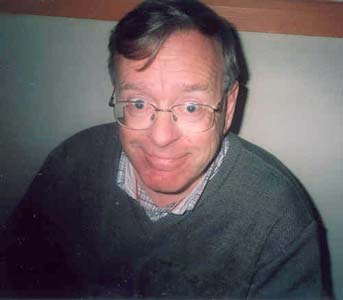 First off, what do you remember of your involvement with Blake’s 7?

Well, I did two episodes of Blake’s 7. One was "Mission to somewhere or other"...

Destiny, was it? I knew I was going somewhere! There was a lovely Welsh actress who screamed ever so well, called Beth Morris. I recall very slender details of "Mission to Destiny", because it was made in 1978, which is now a few weeks beyond my immediate recall, I’m afraid. But I do recall Beth Morris screaming in Welsh. More than that, I can’t tell you.

And then there was this very strange episode called "Gambit", which I’m sure the BBC took great offence at, because it all looked very, ah, camp. With Aubrey Woods and myself, and a few marshmallows, and some things like that, and it was all very interesting. I don’t know what it was all about, but I quite enjoyed playing it.

Oh, yes of course, speed chess, was that right, good lord. Now, what do I remember of it? Apart from having to wear something like a chandelier on my head, which was terribly heavy, and it was extraordinarily difficult to move around without my neck tipping over, one way or the other, and knocking the whole contraption onto the studio floor, so I was constrained from that point of view, but the story, humm, well, it was, to say the very least, a very odd story, and it seemed to attract an enormous amount of attention. But beyond that, I remember very little, I think I was paid, yes I’m sure I was, and that’s about it.

Aside from appearing in many Doctor Who stories as the voice of K9, you also got to appear physically on screen in "The Power of Kroll". How did that come about?

Well, Martin Jarvis was originally billed to play this character called Dugeen, but for some reason, he suddenly wasn’t available. So, what happened next was a very interesting thing, because here I was, on the BBC payroll, I wasn’t having to play K9 for that story, as it was taking place on a swampy planet and his underseal was rusty or whatever, and so the BBC really took good housekeeping one stage further and said, "well, we’ve already got a spare actor around the place, so let’s give him a job and not pay him any more money!" And so, as a consequence, I was allowed to actually get up on my two legs and meet my fellow actors face to face, rather than at knee height. I got to meet a tremendous number of knees doing K9, so it was nice to see faces instead. Yes, it was a nice change.

I remember very much that on that story they had a race of people called Swampies, who were green. I remember the make-up lady, a lovely woman called Kezia Dewinne, had the unenviable duty of painting green on all these people, who were then left to roam around BBC Television Centre, sitting on things. And the poor folks, the cleaners, that worked at Television Centre had to go around for weeks afterwards, swabbing away big splodges of green.

Do you remember the director on that story, Norman Stewart?

Oh, yes, yes, Norman Stewart, I’m not sure how many stories I did with him. I think probably a couple. He definitely did "Underworld", which was a very, very difficult story to do, on the budget allocated. And so what they had to do was make models of these caves, all these wonderful hollows and subterranean tunnels and put them at one end of the studio, and then these poor camera men had to lock off their cameras and just sit watching this model for the entire shoot, while the poor actors ran around on, I think it was, a green set, with the director trying to match them up with these tunnels, and... well, it took just forever. And the actors would look as if they were running into walls, and through walls, and things like that, and I had the feeling it was all more trouble than to have built full sized sets in the first place.

Of course, you were all right on that one.

Yes, that’s right. I only physically played the part of K9 in rehearsals, for the recording, I just did the voice, so I was fine. I think my biggest regret playing K9 though, was that I didn’t have to come along in the mornings and have my face very softly caressed with brushes by beautiful make-up girls, to make me look presentable for the camera. I missed that bit of the day, but at least I could get away quickly, after the show, because nobody knew who I was. But on the set, I just sat away from everyone and read my script and did the Times crossword.

Tom Baker was quite keen on the Times crossword as well, wasn’t he?

Oh, yes, we were crossword addicts. We had a lovely time doing crosswords, and I remember this one time when we were on location in Oxfordshire, where I was sitting in the driving seat of one of those huge great videotape vans, I’d got the Times crossword with me, and was wearing these headphones that were relaying to me what was going on half a mile down the road. I heard the director say, "take five everybody", and I heard Tom Baker say, "John, are you still there?" Of course, my voice was being fed down to the location to some speakers. "Yes, I’m here," I replied, and so Tom said, "have you got your Times crossword? What do you think is twenty-three across? Could it be, um, 'archimandrite'? Or could it be, um, oh, what else would fit in there?" So we worked back and forth, but what I didn’t know, and what I could never have foreseen, was that all that the locals who had come to watch the filming could see was Tom Baker sitting on the grass verge, with K9 beside him, doing the Times crossword together!

You’ve done a lot of voice-over work, haven’t you?

I have, yes. I’ve done a tremendous amount of voice-over work. I’ve done a lot of presentation, for various broadcast outfits, up in Manchester and back in London, and for Channel 4 and for British Forces Broadcasting, and things like that. I spend half my life behind a microphone, which is not really very good, because you want to get yourself seen now and then a little bit. When I left playing K9 I took a big risk, I thought, "No one’s seen me for a year. Will I get any more work?" But instead I was very lucky, in that I had one of the busiest years after playing K9 I ever had! Strange how these things go. There’s no rhyme or reason behind it at all.

How come is it that you’ve focused so much on voice-over work?

You’ve done a number of Doctor Who audios. How do you feel about being approached for Kaldor City for a change?

It’s wonderful. Tremendous. It’s lovely to do things that don’t have such a squeaky voice. I can just use my own voice, and play interesting characters with much more depth. The thing about K9 of course, is that he’s a stereotype. What the audience saw and heard was all that was wanted, and you could go no further than that, but today, working on the script with Alan [Stevens] in the recording studio, there’s much more depth, there’s much more light and shade, and, you know, much more potential in the script, which is nice.

When I was asked to play the part of the Chief Mover, I kept thinking of Sir Humphrey in Yes, Minister and Yes, Prime Minister, a sort of sidekick character, who’s always got the answers, but of course this particular script is interesting because there’s a lot of game playing going on, a lot of testing going on. And um, the Mover’s Mr Security really, it’s a lovely part to play.

I understand Alan send you a copy of Occam’s Razor first?

Yes, yes, he did. Aside from the script, what impressed me particularly was the technical way it was made. The sound picture was very good and very believable, and it created the spaces. It was wonderful. Of course, with radio the pictures are your own, and they’re much, much better than anybody else’s. They’re all inside your head.

What was it like working with Paul Darrow and Philip Madoc again?

Wonderful. It’s an extraordinary thing, you work in this business, very intensely, sometimes, with actors for a short period of time, and then you don’t see them again for years and years. It’s been years since I worked with Philip, it’s been years since I worked with Paul. And, first thing, you fall into a conversation you finished twenty years ago, twenty-five years ago and the rapport is instant. Marvellous, absolutely marvellous.

Because the amount of work for any actor, let alone for myself, is becoming more slender, I had to think of something else I could do. I had to get a second profession up and running. I had taught wine appreciation for at least twenty years, and about five years ago I decided that I had to get some accreditations and qualifications now, so I did a course at the Wine and Spirit Education Trust, and got my certificates and things to put up in the loo to say that I was a kosher sort of person. Now I teach principally introductory courses in London. I do two or three a week, sometimes, depending on the uptake, because these are consumer courses rather than academic courses. And I do wine cruises, I’ve been to the Seychelles, Muscat-- lovely place, very hot-- to Bordeaux, to Brittany, to Portugal and Spain, lecturing on cruise ships to captive audiences, they can’t get away from me, it’s wonderful, and there’s wine to taste along the way as well, which is not bad, so I do that. I’m a judge in the International Wine Challenge, which is held every year by Wine Magazine. So basically, I’m into that quite a bit. Cheers.

John Leeson, thank you very much.

And thank you very much, indeed.

This interview has previously appeared in Celestial Toyroom Issue 324.