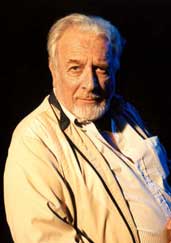 I first met Nick Courtney at a DWAS convention in 1983 called Interface 3, an event themed around the Jon Pertwee era of Doctor Who. Since then, I have attended a large number of Doctor Who conventions at which Nick Courtney was a guest, and indeed, the first convention I organised, in 1985 at Imperial College, had the UNIT gang (Nick, Richard Franklin and John Levene) as guests of honour. I always remember John Levene continually referring to Nick as “The Brig,” and indeed Nick went on to appear at the next two events I organised as well. I have interviewed Nick at conventions many times over the years, and he has always been great fun to work with on stage.

Although in the minds of many fans he will always be the Brigadier, Nick was actually a very accomplished and versatile actor, as can be seen in his turn as Bret Vyon in “The Daleks’ Master Plan”. However, he genuinely enjoyed the accolades he received for his role as Brigadier Lethbridge-Stewart: he told me once that, as the Brigadier, he always had worn a false moustache as he was incapable of growing a real one and yet, as he became more involved with fandom, he did grow a moustache as he felt people expected it of him.

In 2003 I got to work with him on the Kaldor City story “Hidden Persuaders”, and then on the two subsequent stories, “Taren Capel” and “Checkmate”. “Hidden Persuaders” introduced a team of news presenters, Zala Vance and Danl Packard, and I was very happy when Nick agreed to take the role of Packard, a newsreader who starts the series as Reginald Bosanquet and ends up, two CDs later, as Howard Beale. Nick said at the time that he very much enjoyed the chance to play someone other than the Brigadier in a Doctor Who-related series; he was a big supporter of Kaldor City, and appeared at a number of KC signings. Nick has always maintained that the Brigadier’s first wife was called Fiona, and he and Fiona Moore developed a rather risque series of running jokes about this.

I had known that Nick had been ill for quite some time before I received the news of his death, but it was still a real shock to hear about it. I will be among the very many people in fandom who will miss him for years to come.