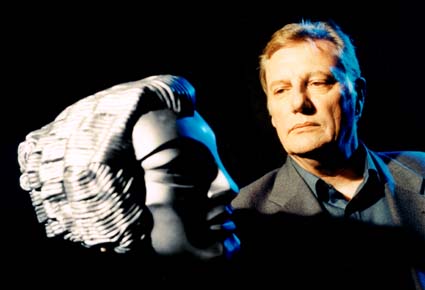 So you've now appeared in six Kaldor City stories. How do you feel about that?

Surprised. I didn't realise I'd done that many.

Iago is an interesting figure, isn't he? He's very much a political animal, something of a terrorist, somewhat postmodern...

Well, I shouldn't say this, really, but I always believed, right from the very first story, that Iago was the best part. I mean, as you say, he's got everything, hasn't he? It's all there really, and that's the best bit about playing Iago, in that it gives a tremendous freedom to me as an actor. He has all those different aspects to him, so I can more or less decide as a performer how I'm going to deliver a line in a particular scene, or play a particular scene in total.

So, given that freedom, how did you decide to interpret it?

Would you call him a villain of the 21st Century? 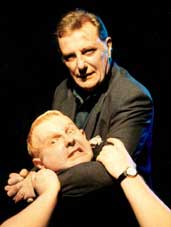 Kaston Iago wouldn't say that. He thinks he's the hero. And that's the way I play him anyway, he thinks he's right. And generally speaking, he is.

So, the anti- hero of the 21st Century then?

You could say that. He's psychologically damaged, I suppose, if you stand back and look objectively at him, but then, who isn't?

But not necessarily in the same sort of way as Iago.

No, quite, but maybe that's because he has more of an opportunity to express his psychosis, if you like, in that he kills people, though, as it turns out not quite as many as a few others in Kaldor City. So, he's not number one in that scale; he probably has a heart.

You play the character in a very laid back sort of way. Would you say he was at peace with himself?

Yeah, completely. Also, from a technical point of view, as you're standing in front of a microphone all day, it's quite a good idea that I should play a laid back sort of character because if he was too frenetic, I'd be exhausted by lunch!

Daniel O'Mahony's script is rather interesting in that it suggests that Iago in this story could be real, or could be a ghost...

What do you make of it?

Well, it depends on the interpretation you take. If he is a ghost, then it's very disappointing for me, because he is banished in the story, and that could mean that he won't be coming back, and that would be terrible, wouldn't it? If it is just a voice in Blayes' head, then that means that Iago is still out there, and obviously I like that idea much better. 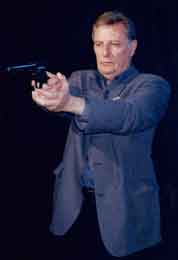 Have you personally any thoughts as to which it is?

No. To tell you the truth, it's a complex piece, so I can't really answer your question at present. I think the intelligent thing about it is that you have to carefully listen to it all to grasp it, and because I'm not in every scene-- colossal disappointment to everybody that it may be-- I'm not getting the full picture here today while recording it. And so I would like to withhold any comment until I've heard it all put together, because it has many disparate elements, and also has some terrific actors too, with Philip Madoc, and Tracy Russell, and Gregory de Polnay, and John Leeson and so forth, lending their own interpretations to it. I think the balance of the voices will be fascinating.

Paul Darrow, thank you very much.