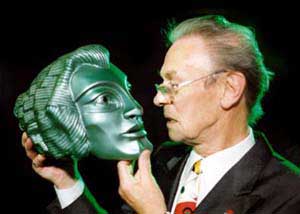 Russell Hunter was born in Glasgow, and worked as an apprentice at Clydebank shipyard before finding that his true vocation lay on the stage. In a career spanning six decades and at least four media, he appeared in a diverse variety of films and television programmes, including Taggart, Up Pompeii, The Sweeney and American Cousins. He was also a habitué of the stage, appearing in the first Edinburgh Fringe Festival in 1947, and making his final Fringe appearance in last year's acclaimed production of Twelve Angry Men. His best-known role, however, was as the odiferous Lonely in the 1970s detective series Callan, alongside Edward Woodward in the title role.

In 1977 Russell appeared in Doctor Who: The Robots of Death as the prickly Commander Uvanov, and we at Magic Bullet Productions were delighted when he agreed to reprise the role for the Kaldor City series. Russell took the role very seriously, giving careful consideration to how Uvanov had changed in the intervening time between the television serial and the audios, and he lent it an incredible stage presence and irascible sense of humour, as well as a powerful and dramatic voice. When we were choosing an audio trailer for the Kaldor City Online index page, it seemed only natural that visitors should be greeted by a typically powerful declaration of intent from Uvanov, in Russell's inimitable style. Many of the cast and crew have fond memories of Russell entertaining everyone in the Green Room with intelligent conversation, ready quips and spontaneous cabaret routines.

"During recording breaks, Russell used to keep all the other actors entertained with his outrageous stories and wicked sense of humour. His ventriloquist act, performed without a dummy, had to be seen to be believed! He told me that he loved the part of Uvanov and the story of 'The Robots of Death'. He was very familiar with it and jumped at the chance of playing the part again. He also got invited to a number of Doctor Who conventions and signings on the back of his Kaldor City work, which he found great fun. He must have known that he was living on borrowed time, but seemed determined to live life to the full right up until the end. He was a smashing actor, a great man, and finally a very courageous human being. I'll miss him very much."

Click here to read an interview with Russell during the recording of "Kaldor City: Hidden Persuaders," which was published in Doctor Who Magazine #324

Obituary for Russell on BBC Scotland